Introduction
A Brief History of Printing

Printing plates are used to transfer an image to paper or other substrates.

The plates may be made of metal, plastic, rubber, paper, and other materials. The image is put on the printing plates using photomechanical, photochemical, or laser engraving processes. 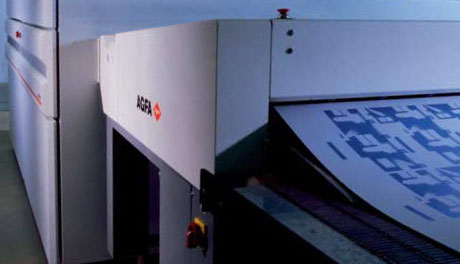 Typically, printing plates are attached to a cylinder in the press. Ink is applied to the plate’s image area and transferred directly to the paper or to an intermediary cylinder and then to the paper.

The printing plates used depends on the type of press, the printing method, and quantity of the print run. A plate is prepared for each color used, or four plates in the case of 4-color (CMYK) process printing. Additional plates are made for spot colors or varnishes.

Analog plates for offset lithography are manufactured with a surface coating of photosensitive material. The plates are contacted with an image on film and exposed to ultra-violet light in order to activate the photosensitive coating.â€¨

The plates work on the principle that oil and water do not mix. An offset press utilizes a fountain solution to wet the plate during the printing process. 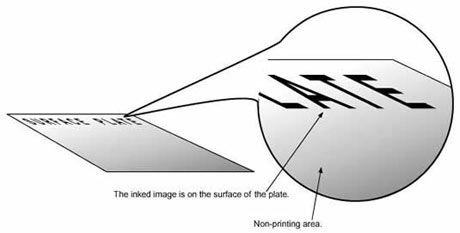 Gravure was actually the first printing process to use computer-to-plate technology.

Electromechanical engraving techniques, which reproduce the digital image onto the gravure cylinder, have been in use for a number of years.

Digital engraving can produce much finer detail than conventional methods. 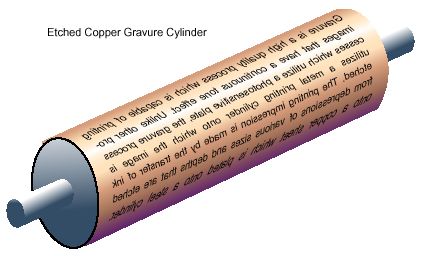 Direct digital electromechanical engraving is the process used to produce most of the plates for the gravure computer-to-plate process. With this process, photographic prints are mounted on a rotating drum where they are scanned.

The scanner records the different densities of the image as analog signals, which are then converted into electrical impulses (digital record).

The scanner is linked to a diamond stylus, which uses the electrical impulses as a guide to engrave up to 6000 individual depressions per second into the copper gravure cylinder. 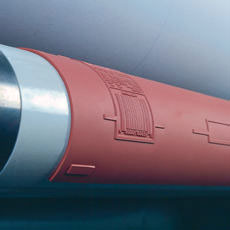 The traditional flexo plate is made from rubber and looks like a giant rubber stamp. The rubber plate is mounted on a press cylinder where ink passes over the raised image areas to produce a printed image.

In flexographic computer-to-plate systems, lasers do imaging directly onto rubber plate substrates. The resulting plate has a relief surface comprised of raised dots of various sizes and spacing.

Ink is applied to the raised surface, which is then printed onto substrates such as paper, tissue, cardboard, foils, or plastic materials. 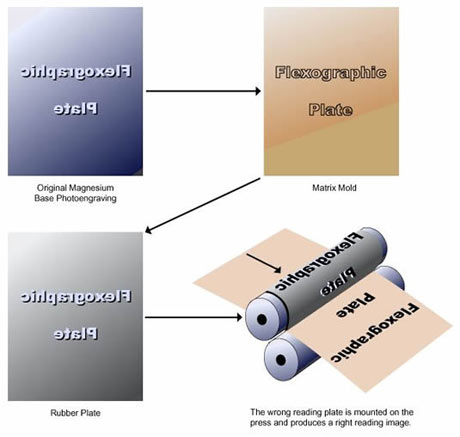 A plate for the letterpress process is referred to as a relief plate. With a relief plate, the image area is slightly raised above the rest of the plate.

It is a direct printing method which means that the image is applied to the substrate directly from the inked plate. 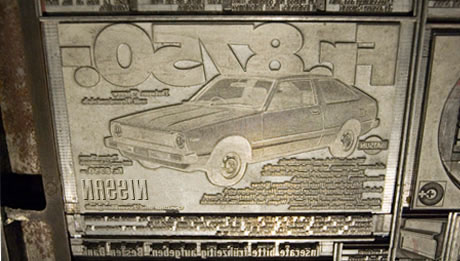 Letterpress plates do not require any dampening during the printing process because only the raised image areas of the plates receive ink and the non-image areas remain clean.

The letterpress method is used for some newspaper publishing, labels, and narrow web printing, but it cannot deliver the quality of other printing processes.

The original letterpress plate was constructed with movable metal type mounted in a frame called a chase. Each letter or character had to be arranged in the chase which was very time consuming.

Digital platemaking, commonly called Computer-to-Plate, is a method of imaging a printing plate directly without the use of film.

A plate being produced digitally via CTP

Information that has been stored digitally is imaged directly onto the plate with the use of laser beams.

The plating process is performed off the press or it can be accomplished on presses that are specially equipped to allow direct imaging of plates on the press. 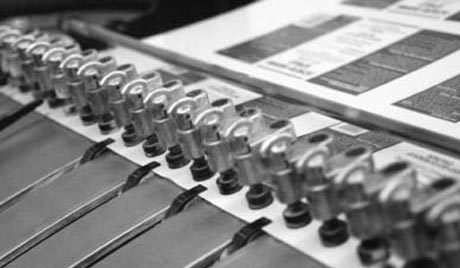 Plates for computer-to-plate technology can be classified in several ways.

They are often described by the base substrate of the plate, emulsion type, exposure effect, exposure spectrum, exposure power, and/or the property of creating debris on the plate during imaging.

There are three types of substrates used as a base for most digital plates: metal, polyester, and paper.

Plates made from metal are used for the largest print jobs because they have a much longer life than other substrates. Aluminum, which is traditionally used as the substrate for metal analog plates, is also used for digital plates.

The plates are grained so they are able to hold a thin film of moisture, which keeps the non-image areas free from ink during the print run. The areas of the plate that are imaged become receptive to ink.

Earlier versions of polyester plates produced substandard printing which has given them a poor reputation in spite of the fact that the plates have been substantially improved during the past few years.
â€¨

Polyester plates are not grained like metal plates during manufacturing, but are instead chemically treated so the plate surface will hold moisture during the print process.

Paper plates are made with a cellulose material. Like polyester plates, paper plates are not grained, but are chemically treated during manufacturing so that the surface is receptive to a thin layer of moisture.

The plates are used for short runs on smaller printing equipment and use a toner-based technology for imaging the plates.

The plate emulsion is the material that is coated onto the base substrate, which reacts to the wavelength of light emitted by the CTP imaging laser to produce an image on the plate (either a positive or negative image).

The coating on a silver halide/diffusion plate is made of photosensitive compounds that are similar to the compounds in photographic film.

Metal plates are now panchromatic which means that they are sensitive to visible light wavelengths.

The exposure spectrum describes the portion of the electromagnetic spectrum used for imaging CTP plates, such as infrared for thermal plates, visible light for light sensitive plates, and ultraviolet for UV-sensitive plates.

When certain types of CTP plates are imaged, material is removed as a result of the imaging process and debris is created on the surface of the plate.

There are other types of CTP plates, in which no material is removed from the plate and no debris is formed.

When they are imaged, a residue is formed on the plate from the areas of the plate emulsion that are ablated, or removed, during imaging. The residue must be washed from the surface of the plate before it can be used for printing at the press.

During the imaging process, the laser loosens areas of the plate emulsion, but rather than washing it off manually, the fountain solution at the press further loosens the unwanted material from the plate.

When non-ablation plates are imaged, there is no residue left on the plate.
Many of the plates are constructed of traditional grained aluminum and require less energy for imaging than ablative plates. 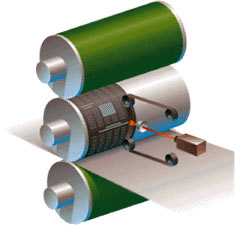 Offset printing systems have been developed that not only eliminate film from the workflow, but also eliminate the plate as well. These systems are known as computer-to-press offset and use lasers with thermal ribbon to create images on removable cylinders.

Each of the cylinders (one for each process color) is imaged in one step with a direct thermal transfer process. A thermal material, which becomes the image area, is transferred to the plate.

Platesetters are of three basic designs: flatbed, internal drum, and external drum. Each design has its advantages and each one is accurate in its imaging capabilities.

The flatbed system allows for easy loading of the plate. Most flatbed platesetters use a single imaging beam, which is deflected onto the plate surface with a rotating mirror. 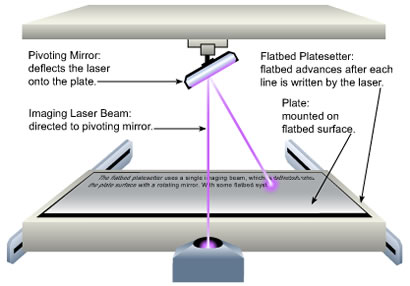 The design of the flatbed unit allows for efficiency in plate handling and high production rates, but the imaging technique used with flatbed systems limits the width of the imaged area.

A plate is mounted on the inside of the drum and is held in place with a vacuum that draws the plate to the curved surface.

A single laser beam is used to write the digital image onto the plate. The laser beam is projected onto a spinning mirror that rotates at a very high speed. 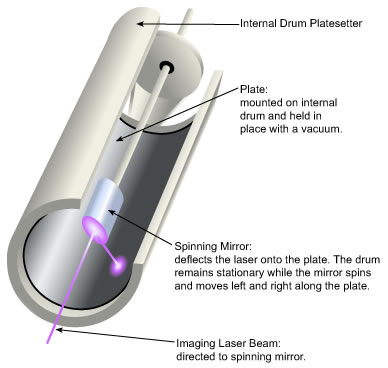 The spinning mirror deflects the laser beam onto the plate and travels down the axis of the drum. The concave drum remains stationary. In order to change the resolution of the image on the plate, the diameter of the laser beam is changed.

External drum platesetters are designed to have the plate mounted on the outside of the drum. As the drum rotates on its axis, a multiple beam laser head moves parallel to the drum and burns the image on the plate. 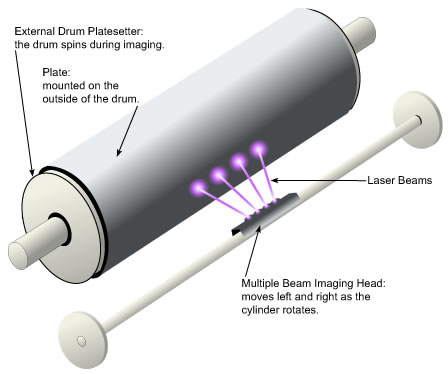 The external drum system does not require any mirrors for the lasers and it allows the imaging head to be placed closer to the plate surface. This is beneficial for imaging thermal plates, which require high-energy output for proper results.

Your message has been sent successfully

A representative will contact you shortly regarding your project.

NOTE: Please be sure to check your email's Spam or Junk folder since our responses may land there the first time you hear from one of our project managers.

THANK YOU FOR YOUR INTEREST IN FINE PRINT!
Close Window